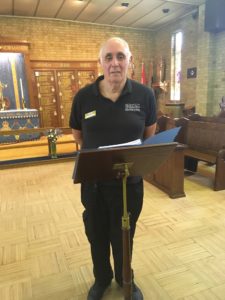 I have been a volunteer at BHMM since it opened in January 2019.

Born and raised in Croydon, I was therefore always relatively closely located to the Airfield. Like so many of my fellow volunteers, of similar retirement age, I have long harboured a deep interest in WW1 and WW2 aviation since childhood. Oh those wonderful Airfix Kits! As a child, my one regret was never having joined the ATC.

My first experience of actual flying was as a schoolboy at Biggin Hill, when I was taken for ‘flips’ in a Tiger Moth, a Hornet Moth and a De Havilland Chipmunk.

Now, having retired from a long legal career, I became a qualified tour guide at Croydon Airport Visitors Centre. It therefore seemed a natural progression to become involved as a volunteer at BHMM.

The museum, I accept, is small compared to other RAF museums namely Hendon, Tangmere, East Kirkby and Duxford, but its size gives it a unique intimate quality, which the larger museums lack. Here you will see no eternally rolling gun camera footage of aircraft being shot down and pilots burning. You will, however, learn not only of the lives and histories of the pilots, but also the ground crewmen and women who served at the base. You will be made familiar also with the people who lived nearby, their families and the contribution they made. Consequently, you will be made aware not just of the few but of the many. I am constantly reminded that the average age of pilot during the Battle of Britain was 21, and that at its height the life of an often inadequately trained pilot newly joining a squadron was just 4 days.

My role primarily is that of a Chapel Host, and there you will find me with my close friend Paul Church, a major in the Salvation Army. It therefore follows that the Chapel is very special to him and myself as it commemorates the loss of 453 pilots from the Biggin Hill sector. It is a working chapel with regular Sunday services, and each day extracts from the Book of Remembrance are read.

On Wednesday afternoons in the Chapel I give a short half-hour talk about the women pilots of the Air Transport Auxiliary. These were women, who, with their male counterparts would fly and deliver up to 74 different types of aircraft from the factories to the combat airfields. When attending the Chapel I have noticed that our visitors are polite, curious and enquiring. The peaceful atmosphere often results in them revealing much about themselves and their families during the war. We have heard so many interesting stories from them, ranging from the hilarious to the profoundly moving.

On 5 June, the eve of the 25th anniversary of the D-Day Landing, I was on duty, quietly reflecting on my own father, who was with the Canadians on Juno Beach. It was then I met an incredible lady of 96, called Joan. She was a WAAF Corporal Plotter in the operations room on D-Day. With a mind as sharp as a tack, she gave a graphic account of all that took place. She knew all the Aces of the day, including Al Deere and ‘Sailor’ Malan. I invited her back with her grandson so that she could repeat her account to other volunteers, promising that if she did an almighty fuss would be made of her!

Our knowledge is constantly being increased by what we learn from our visitors.

So you see, I have found a niche on my retirement, constantly improving my understanding of military aviation and Biggin Hill in general. I enjoy also the great camaraderie with the other volunteers, who share the same interest.

I recommend everyone to come and pay us a visit, where they will receive a warm welcome and discover the history of the airfield, which commenced operations in 1917.