Thanks to Chapel Host Allan Ede for writing the first in our series of Volunteer Blogs:

My first ever aeroplane flight was from Biggin Hill on a Sunday afternoon in the mid-60s, in a De Havilland Dragon Rapide biplane on a 10-shilling joyride with my younger brother. My second flight experience was also from here in 1970 with a flying club. My first air show was the 1964 International Air Fair and I have attended the Biggin Hill air shows nearly every year since. I’ve lived in Biggin Hill for over half my life, and with my wife, Sue, have brought up a family here. It has become our spiritual home and there are no plans to leave.

I grew up making kits of military aircraft and I learned the history of the wars they fought in and of the people who flew with them. It has been a life-time interest, so, when it was finally decided to build the new Memorial Museum, I did not waste time applying to help as a Volunteer as I felt I had a good knowledge to pass on. I now get to do that with the many visitors who have poured in ever since we opened the doors in February 2019, but I especially enjoy talking with those from overseas, from Australia, Canada, the USA, South Africa, who come to see this historic battlefield and memorial, often with their family connections. Their visits are often excitedly enhanced by the sight and sound of a real Spitfire flying from the airfield.

My special place is the adjacent St. George’s RAF Memorial Chapel, where I am often found on a Friday afternoon on Volunteer duty, a place I had visited over many years from back when there was a real Hurricane and Spitfire on gate guard outside, to reading the Lesson at a friend’s wedding. It is full of memories and remembrance of the 454 men who flew from this Sector in WW2 and didn’t return, but it’s the beautiful stained-glass windows that the visitors marvel at most and take this memory with them.

Listed on the reredos behind the altar, among the many squadrons, is 133 Squadron, one of the three RAF ‘Eagle’ Squadrons of volunteer American airmen who joined and fought with the RAF prior to the USA entering the war. That squadron flew from Biggin Hill for four months in 1942 and lost 13 pilots during that time. It is my specialist subject and I give talks to the visitors who usually have no idea of American involvement in the RAF.

We have a great team of Volunteers and Staff who work hard to make the museum a success. They are a pleasure to be with and make volunteer days an enjoyable experience, so my decision has been fully rewarded. 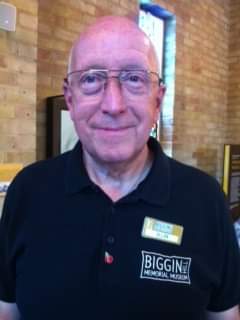