The Battle of Britain was a major air campaign fought over southern England in the summer and autumn of 1940. After the evacuation of the British Expeditionary Force from Dunkirk and the Fall of France, Germany planned to gain air supremacy in preparation for an invasion of Great Britain. The pilots of RAF Fighter Command – made up of men from all over the Commonwealth and occupied Europe – were supported by a vast network on the ground, including mechanics, radar operators and factory workers, amongst many more. Ultimately, the Luftwaffe was defeated by Fighter Command, forcing Hitler to abandon his invasion plans.

(Historians have different views on the precise definitions of the phases of the Battle, but the following are broadly agreed.)

Phase 4
7 September – 30 September 1940
Luftwaffe switched to daylight attacks on London. This would be an error of critical importance. The raids had devastating effects on London’s residents, but they also gave Britain’s defences time to recover. After decisive RAF victories on 15 September (which became known as ‘Battle of Britain Day’), the threat of invasion faded. The final daylight attack on London was 30 September but fierce night-time raids continued.

Phase 5
1 October – 31 October 1940
The defences of Fighter Command were no longer seriously threatened but night-time raids over London intensified – this was the start of the Blitz.

Winston Churchill had been British Prime Minister for less than a month when the Dunkirk evacuation took place at the end of May 1940. The British Expeditionary Force, sent to Europe to support France, buckled under the force of the German Blitzkrieg, and it was a miracle that over 338,000 British and French troops were rescued from the beaches.

On 18 June, Churchill made his famous ‘Finest Hour’ speech, which included the following words, perhaps more prescient than even he expected: ‘the Battle of France is over. I expect that the Battle of Britain is about to begin’. At that time, Britain expected a German invasion, and indeed one was being planned by Hitler under the codename Operation Sealion. The Nazi Blitzkrieg tactic used aircraft both to protect ground forces and to deliver overwhelming firepower; these days we would call it ‘shock and awe’. Hitler knew that control of the skies would be vital to enable a successful invasion, and instructed Hermann Göring, head of the Luftwaffe, to eliminate the Royal Air Force.

In July 1940, the situation looked bleak for Britain. RAF Fighter Command had 644 aircraft available; the Luftwaffe had 725 Me109s (single engine fighters, similar to a Spitfire). The Luftwaffe pilots were much more experienced than the RAF’s, having gained real combat experience during the Blitzkrieg, and the Spanish Civil War before that.

The average RAF pilot was just 20 years old, and most had joined up because flying looked like fun; now they were about to fight for their lives and for their homeland.

Arriving at RAF Biggin Hill for the first time, Geoffrey Wellum, the youngest pilot in the Battle, just 19 years old and called ‘the Boy’ (see photo), was shocked by what he saw.

‘Arriving from the peace of Pembrey in South Wales, my first impression was, there’s a war on, this is a serious business. The hangars were in ruins, bomb craters everywhere, broken aeroplanes all around. I was stupid enough to look into the cockpit of one and there was blood in it, and it upset me a bit’.

The Battle of Britain officially started on 10 July and, like many battles, began quite slowly, with German probing raids designed to draw the RAF up into attritional combat. Then bombing raids on RAF airfields, mainly in the South East, started in earnest, designed to destroy planes on the ground and damage airfields to render them inoperable. There were also raids on radar stations, ports and aircraft manufacturing facilities.

German raids included bombers and fighters. The fighters had two roles: to protect the bombers and to destroy the RAF planes drawn into the air by the bombing raids. Against these, the RAF had two main fighters: the fast and agile Spitfire, which mainly engaged the Me109 fighters, and the Hurricane, which was slightly slower and less manoeuvrable, but was a good gun firing platform for attacking bombers.

Initially, British losses were unsustainably large, driven partly by the lack of experienced pilots and partly by the struggle to replace them with adequately trained new pilots. At the height of the Battle, a trainee RAF pilot only had 2 weeks at an Operational Training Unit before being thrust into bloody combat.

By the end of August, however, the tide had turned a little. The Nazis had originally thought that the RAF could be destroyed in a few days but, weeks later, RAF fighters were still turning up in numbers to intercept Luftwaffe raids. At this point, Hitler directed Göring to bomb London, starting the Blitz, partly as a tactic designed to damage British morale, and partly in reprisal for RAF bombing raids on German cities. Many of these attacks were at night, which lightened the workload for Fighter Command a little, and reduced the frequency of raids on airfields.

The Battle raged on through September, including 15 September, Battle of Britain Day, when two massive German raids were confronted by every available RAF plane in the South East. It was a decisive victory for the RAF: sixty German aircraft were shot down for the loss of twenty-six RAF aircraft.

Two days later, Hitler postponed Operation Sealion, and the Luftwaffe further shifted from daytime raids on airfields to nighttime raids on cities and industrial areas. The Battle gradually petered out, eventually finishing officially on 31 October. The cost had been considerable: in just 112 days, the Luftwaffe lost 1,897 aircraft and 2,662 aircrew; the RAF lost 1,023 aircraft and 537 aircrew.

So, why did Britain win the Battle of Britain? Among others, the following three factors were important, and possibly decisive in combination.

First, Hugh Dowding, Commander-in-Chief of RAF Fighter Command, created a powerful intelligence gathering system, which enabled his Group Commanders to use scarce resources (men, machine and fuel) to maximum effect. This was particularly important for Keith Park, Commander-in-Chief of RAF Fighter Command 11 Group in the South East of England, where the vast majority of the battle was fought.

The Dowding System fed raw data on German aircraft movements from radar stations and Royal Observer Corps ground spotters into a number of Filter Rooms (see photo) operated by women from the Women’s Auxiliary Air Force (WAAFs). These would collate the data, decide where the German aircraft were heading, and instruct the appropriate airfields to scramble and intercept the raids. The Germans knew about the radar, but under-estimated its value.

Second, Churchill put Lord Beaverbrook in charge of aircraft supply. He did a brilliant job, building 1,743 new aircraft and repairing countless others, so that in October, Fighter Command had 747 aircraft, whereas the Luftwaffe had just 275 Me109s: a massive turnaround in numbers. Germany had not expected such a costly attritional battle and were unable to ramp up their own supply process.

Third, home advantage for the RAF had a huge emotional and practical impact. It’s not hard to believe that men fighting to defend their homeland might be more motivated than those fighting over a foreign country. Also, the fact that the German aircraft were at the edge of their operating range meant that they had limited fuel for dogfighting. Finally, German pilots that were shot down were likely to end up as prisoners of war, whereas British pilots could be back at their airfield in a few hours and able to fight again.

Whether or not winning the Battle of Britain saved the country from invasion has been debated extensively. At the very least it inflicted a first military defeat on Germany, it did wonders for Allied morale, and it helped convince America that Britain was worth supporting.

As Churchill memorably announced the Battle of Britain in June, he equally memorably summed it up on 20 August: ‘Never in the field of human conflict was so much owed by so many to so few’.

RAF Biggin Hill was one of the eight main Sector airfields for Fighter Command 11 Group (see map), which was commanded by Keith Park. It had a central role in the Battle; 340 victories were claimed by the airfield, at a cost of 54 pilots.

Churchill passed Biggin Hill on his way into London from Chartwell, his home nearby, and he had a soft spot for the airfield, calling it his ‘strongest link’ in the chain of airfields protecting London. It was right in the path of German planes heading for London, and it was frequently attacked.

On 30 August, a surprise second raid in the evening wrecked a number of buildings including a hangar and the WAAF living quarters (see photo). One bomb fell directly on an air raid shelter, killing 39 people inside.

Felicity Peake, who would become the first Director of the Women’s RAF, was in charge of 250 WAAFs at the airfield at the time, aged just 26. After the bombing, she went door to door in Biggin Hill, to get accommodation for her homeless WAAFs.

There were many acts of bravery performed at Biggin Hill during the Battle. Three WAAFs won Military Medals for resolutely staying at their communication posts during the raids on 30 August: Sgt. Elizabeth Mortimer, Cpl. Elspeth Henderson and Sgt. Helen Turner.

After being forced to leave her post, Mortimer ran around the airfield flagging the positions of unexploded bombs after heavy bombing knocked out ground to air radio, even after being blown off her feet by a bomb. Henderson helped to dig out several WAAFs from a collapsed trench.

The Battle had a major impact on the lives of the people who happened to live in the Biggin Hill area. Geoffrey Greensmith was six years old at the time (see photo); his father Bill ran the Nightingale cafe there, which served tea and cakes to the pilots, ground crew and others serving at the airfield. As ‘Bill’s kid’, he had unfettered access to most areas.

Along with the fun times searching crash sites for treasured bits of aeroplane to trade with his mates, there were moments of huge fear and trauma, such as seeing his father comfort a dying German airman, who had parachuted from a damaged plane into his family’s garden hedge.

What's on this week? 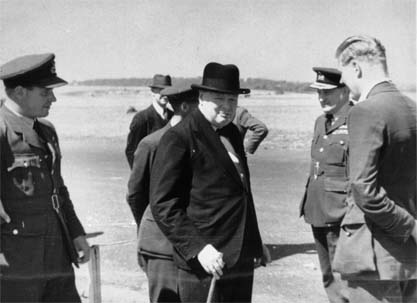 Join Andy (BHMM volunteer) this Wednesday for his talk about the life of Winston Churchill and his role in developing defences at RAF Biggin Hill.… 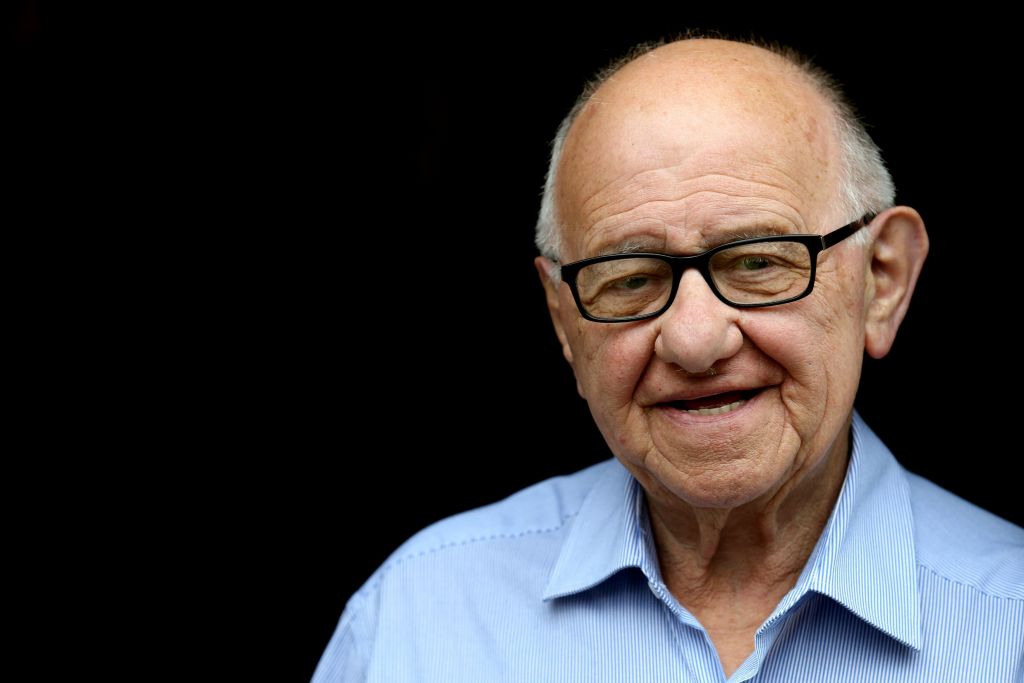 Zigi Shipper is a survivor of the Holocaust. As a child, he experienced the Lodz Ghetto and several camps including… 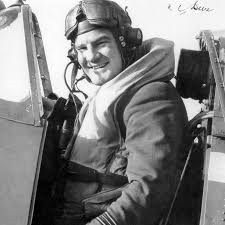 Join Aden Lane (BHMM volunteer), for a talk on Flight Lieutenant Al Deere, one of the luckiest fighter pilots of…