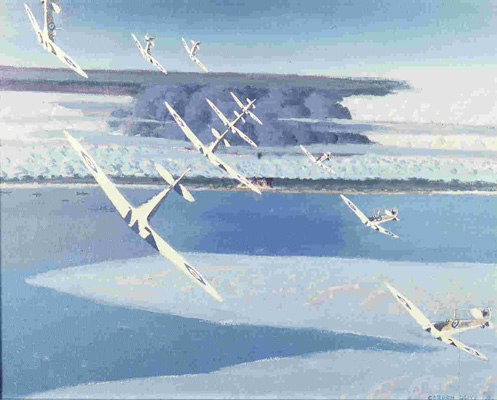 Adult Lecture Series: The RAF and the Luftwaffe in the 1940 Evacuation of Dunkirk NOW POSTPONED

Join Harry Raffal, a historian working for the RAF Museum London, for an evening lecture on the role the RAF played during Operation Dynamo, the 1940 Evacuation of Dunkirk.

The success of Operation DYNAMO has tended to obscure the criticism the RAF faced from both soldiers and naval personnel involved in the evacuation. The hostility towards the RAF was so extreme that Churchill made a point of defending the RAF in his address to Parliament on 4 June 1940, praising the RAF’s efforts and acclaiming their ‘victory inside this deliverance’. Criticism as to the absence of the RAF has largely been dispelled by Churchill’s statement, and subsequent history, as well as the official histories of the war. However, there has been little evaluation as to how effective the RAF were in supporting Operation DYNAMO and the reasons behind the Luftwaffe’s defeat. This paper will consider the resources and tactics that Fighter Command employed during Operation DYNAMO. Bomber and Coastal Commands’ role in supporting Operation Dynamo in several areas, particularly shielding the evacuation routes from E-Boats and bombing missions to support the Dunkirk perimeter, will be reflected upon. The advantages the Luftwaffe is typically assumed to have enjoyed over the RAF in this battle, notably a greater period over the combat zone due to advanced air bases, will also be considered. It will be argued that the conflicting operational demands on the Luftwaffe during the early stages of Operation DYNAMO, and the weather, were the greatest inhibitor to their success and not the RAF. Fighter Command’s failure to protect the daylight evacuation on 1 June will also be shown to be linked to earlier operational decisions. The paper will argue that Bomber and Coastal Command were largely successful in their contribution to Operation DYNAMO. It will conclude that while the RAF made a meaningful contribution to Operation DYNAMO it was not responsible for the Luftwaffe’s failure to halt the evacuation, the reasons for which will be shown to lie elsewhere.