During raids a mobile anti-aircraft pom-pom gun fired loudly from the railway embankment opposite the house (the air-raid siren was pretty close too) though often at night I slept through all the noise undisturbed. We played in empty unlocked railway carriages in the sidings by Orpington Station and found a restaurant car with its galley full of cooking utensils and cutlery, found an explosive fog-signal which we fastened to the railway line and pelted with large stones until it went off with a mighty bang; ran along the handrail of the footbridge over the railway lines; found  a small underground shelter behind a garage at the bottom of Crofton Hill which was dug in the earth and had walls reinforced by horizontal planks- no lights, so we had to carry torches- and it was damp and smelt heavily of wet fungus. FLW666 was the number of a big smart Buick which parked once near the top of Crofton Hill- I chanted this magic number over and over as I cycled home.

We walked one day right up on to heathland overlooking, I suppose, Poole Harbour, and found the remains of an army camp with assorted debris, including a few playing cards with unfamiliar kings, queens and knaves. I imagine this to have been a camp for soldiers awaiting embarkation on D-Day. When we got back to Orpington we heard that Deakie had had a narrow escape when a bomb (doodlebug presumably) had blown in her  bedroom window and sent a heavy wooden shutter flying through the room to punch a huge dent in the wall exactly where her head would have been had she not decided for once not to have her late night drink (Horlicks? Ovaltine?) in bed. The weight of the shutter would probably have crushed her too. 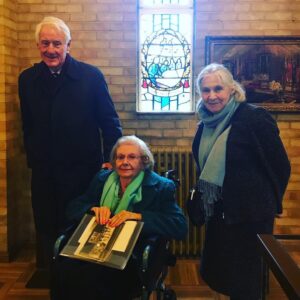 Ann Galley, nee Dale, worked as a plotter at RAF Biggin Hill between 1941 and 1944. She joined up aged 18 because her father was in the RAF. Her cousin, June Harrison, was also stationed at Biggin Hill and the two of them were together for most of the war. Ann fondly remembers dressing up and putting on performances at Keston Village Hall with other WAAFs.

She told us about the dangers of working on the site. The young women were told not to walk around in groups as they could have been a target for bombs. The original operations room at RAF Biggin Hill was damaged during heavy bombing raids in summer 1940. It was then moved to the ballroom in Towerfields, a house in Keston. Here, Ann would stand all day at the map table, listening out for codewords through her earphones. She was later promoted to Corporal. A visit from Eisenhower and the Eagle Squadron later in the war brought much excitement. They brought boxes of oranges, a great luxury at the time. Ann was posted to RAF Northolt in 1944. She admits her wartime work was tough but she recalls feeling very patriotic. She was proud to show us her medals. 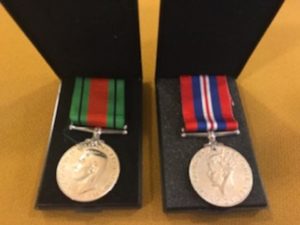 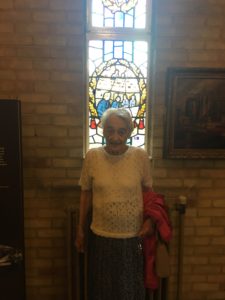 Rosemary Cruddas was based at Biggin Hill during 1943-44, working as a plotter. She found her very work very interesting and she kindly shared with us a picture of the Biggin Hill operations room in 1944. She spoke fondly of her time here, going to dances and socialising with the pilots. Her friend Jacqueline was the girlfriend of one of Biggin Hill’s most well known fighter pilots, Al Deere. She reminded us of how scary the war could be as she recalled the bombs raining down on her house in Crystal Palace before she joined up. 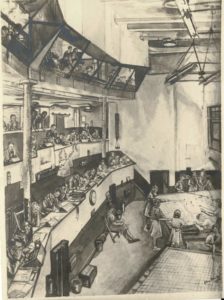 Tommy and Lorraine Balmforth, both stationed at RAF Biggin Hill in 1942

Katrina Balmforth told us the story of her parents, Lorraine and Tommy, who met and fell in love at RAF Biggin Hill in 1942. Lorraine Tydeman joined the WAAF in 1941 and worked as a driver. She often had to drive pilots  to their dispersal units. Tommy Balmforth was a Spitfire pilot who was posted to Biggin Hill to command 124 Squadron. After a short courtship the couple married. If you would like to find out more, Katrina has created a website about their story: https://www.twolives.co.uk/  It is a really lovely tribute to her parents and includes letters Tommy sent to Lorraine and poems Lorraine sent to Tommy. 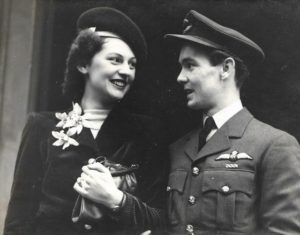 Arthur Sheppeck, lived near Biggin Hill during the Battle of Britain as a child

He remembered that school children sometimes had to test out their gas masks in a gas filled ARP van:

As you can see I was very young at the start of the Second World War.  I do remember being evacuated. There was myself, my mother and my brother. We were sent to a farm in a village called Maids’ Morton, near Buckingham in Buckinghamshire.

My father was in the Home Guard. We were told when we had to leave he used to cycle up to see us, on reflection I think he would his cycle on the trains (those were the days when there were guard vans). And then cycled from the station to see us at the farm at Maids’ Morton. My father loved this farm. Or was it us, not too sure.

It was an old-fashioned farm with a 16th century farm house in a lovely setting, it still had the water pump outside the back door, after the war we still went there for our holidays. Not any more, the farmer passed away and the old farm house burnt down. (It had a thatched roof which caught fire from a spark from the chimney. My brother went to the local village school, myself I was too young.

When we came home we had a Morrison shelter in the front room where we sheltered. On one occasion a doodlebug dropped in the next road, which shook the house, my father was in the back room at the time, we went to find him. He was still alright sitting in a chair with the plaster from the ceiling all over him. Afterwards we found we had lost all our chickens. After the war, I was one of the last to get called for National Service.

One of our visitors, Robin Barnes kindly shared his father’s stories with us: 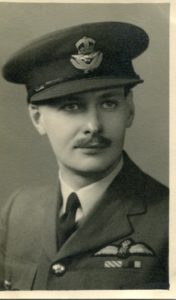 Between 21 June 1941 and 7th February 1942 Colin was posted to 12 Squadron at Binbrook, first as a Pilot Officer and later as Flying Officer. During that time he flew twenty operational bombing missions in Wellingtons as pilot and captain of the aircraft. His tour of duty was cut short when he crashed on 6th February 1942, in snow, near Sheffield, whilst returning from a mission. Injuries from the crash stopped him from flying further operations. We don’t know who penned the following ditty (not Colin) but it has always been in his memorabilia and it obviously touched a chord.

“How it appears to us”

The day dawns warm and sunny,

The forecast – clear and bright

Although this may sound funny

There’ll be no “ops” tonight!

An Air-Vice-Marshall, by his fire,

Looks out, one foggy morn,

Runways thick with mud and mire

And a bloody great thunderstorm

He rubbed his hands with a fiendish sneer,

From his eyes shone a baleful light

He shook with glee, and was, I fear,

A really most horrid sight

He woke his minions from their sleep

And from his carpet took a bite

“There’s rain and hail and snow and sleet,”

On one occasion Colin’s low flying got him into trouble. On 23rd August, whilst returning from a local N.F.T. flight in a Wellington (W5552), Colin decided to “beat up” (pass low over an airfield) RAF Grimsby (Waltham), a neighbouring station about seven miles from Binbrook. This was, of course, quite contrary to standing orders. He might have got away with it except that a senior officer was visiting Waltham that day. As a consequence, Colin was placed under open arrest by his Station Commander.

Open arrest meant that he was confined to his room rather than actually “in the cells”. That night no one brought him any dinner so he went down to the Officer’s mess. His C.O. was much embarrassed since he wasn’t supposed to leave his room. How long he was under arrest I don’t know.

Colin told me that he had a plan of defence worked out. He let it be known that he intended to call the senior officer, who had observed the low flying, as a witness. Knowing that this particular officer was a bit of  a “desk wallah” and that his aircraft recognition was poor, it was Colin’s intention to cross examine him, at length, about how sure he was on the type of aircraft he had seen low flying. He thought that there was a good chance that by confusing him with aircraft recognition silhouettes he would eventually show that the officer couldn’t recognise a Wellington and thus throw doubt on the credibility of the evidence. Apparently Colin made his intended line of defence widely known so that it would get back to the senior officer.

Colin’s flying log book has a footnote for that day: 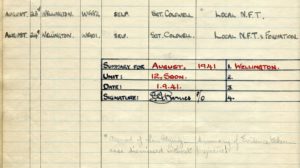 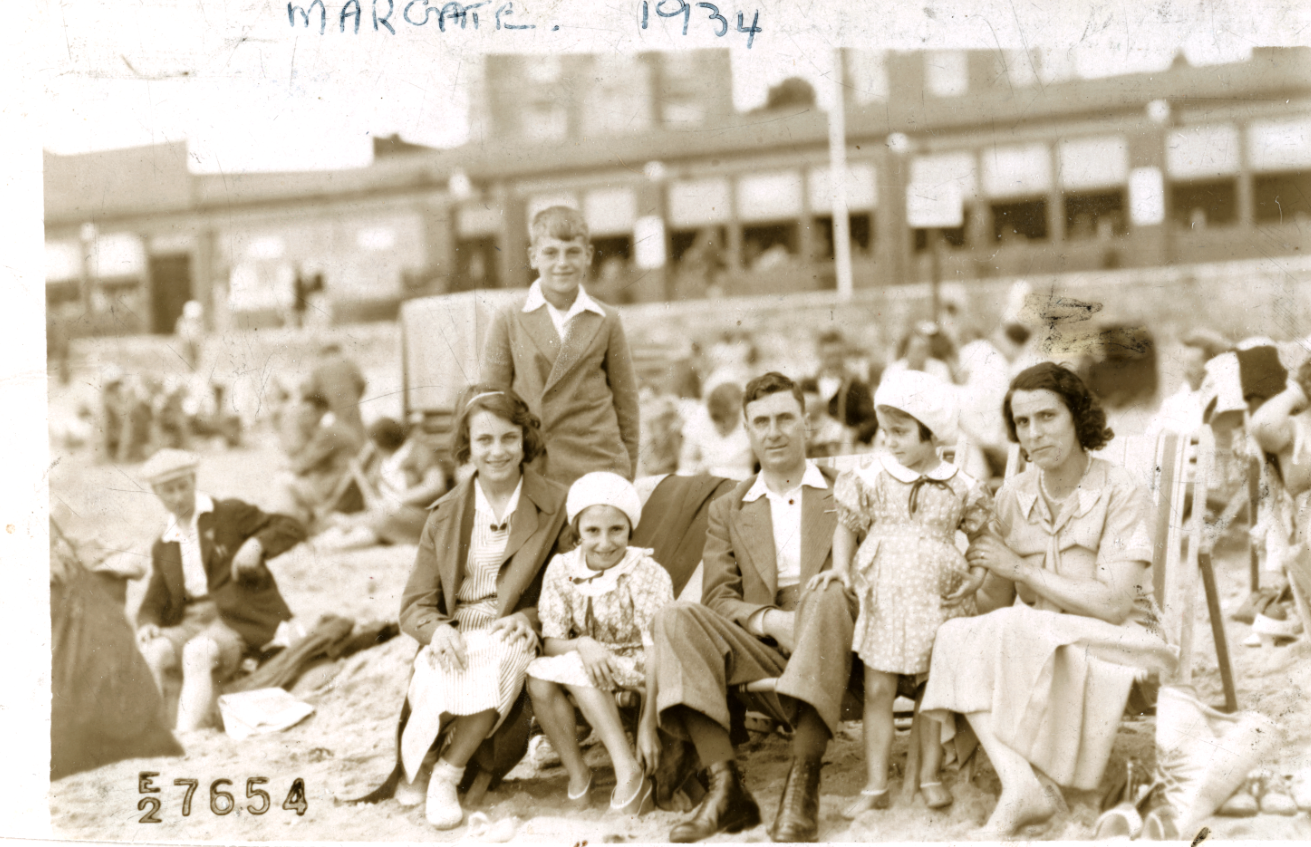