October is Black History Month, a time to focus on the heritage and legacy of black British communities and to recognise the vital contribution that people of African and Caribbean descent have made to our history, especially during the Second World War.

Many fighter pilots showed extraordinary determination by making long and dangerous journeys across the world to serve in the Royal Air Force. Pilots from 12 different countries flew out of the Biggin Hill sector during the Second World War. Distant countries helped to defeat the enemy in many other ways too. One of them was by providing financial aid for specific squadrons which eventually received the name of the sponsoring country. Such squadrons were called ‘gifted squadrons’. Many ‘gifted squadrons’ were stationed at RAF Biggin Hill, such as 74 Trinidad Squadron, 72 Basutoland Squadron and 91 Nigeria Squadron.

The majority of RAF volunteers came from Jamaica and Trinidad. One Jamaican compatriot who served at Biggin Hill was Vincent Bunting. He was born in Panama in June 1918 and raised in Kingston, Jamaica. He joined the RAF in 1940. After serving briefly with 134, 81 and 501 Squadrons, Bunting joined 611 Squadron at RAF Biggin Hill in December 1942. Flight Lieutenant Vincent Bunting flew Spitfires from 1942 to October 1944 when he was posted to 154 Squadron, which operated Mustang fighters. On 27 March 1945, Bunting shot down an enemy aircraft near Lübeck in Germany. In 1945 he was commissioned as a Pilot Officer, and in June he received his last flying post in the RAF, joining No. 1 Squadron. Bunting married Charlotte Agnes Davis in Bromley in 1945. He then served in various administrative posts prior to being discharged from the RAF with the rank of Flight Lieutenant in 1948. Bunting and Charlotte left Britain and went to live in Antigua and later Jamaica, where Bunting became a superintendent in the Jamaican Police Force.

Vincent Bunting wasn’t the only black airman to distinguish himself. As the “colour bar” (an official policy which stated that only ‘British born men, of British born parents, of pure European descent’ could receive officer’s commissions in any of His Majesty’s armed services) was lifted in 1939, the RAF began recruiting for aircrew further afield. However, despite the formal end of discrimination, black people still found it difficult to enlist. Some therefore travelled at their own expense to join the RAF in Britain while others joined the Royal Canadian Air Force (RCAF). It’s difficult to determine the reason for such commitment from people of distant countries. One explanation was given by Flight Lieutenant John Blair, DFC, of Jamaica and 102 Squadron: “Many people don’t think about what would have happened in Jamaica if Hitler had defeated Britain, but we certainly would have returned to slavery.”

It’s estimated that over 6,000 West Indians volunteered to defend Britain against the Nazis during the Second World War. It is difficult to determine exactly how many black personnel served in the RAF, and in which units, because they were fully integrated and their ethnic origin was not entered on their personal records. However, over 500 black airmen are known to have served as aircrew with Bomber, Fighter, Coastal and Flying Training Commands. And of these, 150 – or 30 per cent – were killed in combat or in accidents. About 100 of the volunteers became officers and 103 were decorated for gallantry or for exceptional service. In Africa, the colonial authorities obstructed the enlistment of black personnel and only 60 volunteers were accepted. A further 5,200 entered the West African Air Corps, a local auxiliary force supporting RAF units based in Nigeria, the Gold Coast (Ghana), Sierra Leone and Gambia. A number of Black Britons, including women, are also known to have served.

Lillian Bader was the first black woman to serve in the regular British armed forces, joining the WAAF and serving as an instrument repairer.

The first black volunteers were selected to train as fighter pilots in 1941, but Sergeant William Clarke’s contribution to the Allied war effort goes back much further. Clarke is considered to be Britain’s first black pilot. He was born in Kingston, Jamaica, in 1895 and in 1915 he joined the Royal Flying Corps. After undergoing pilot training, he took part in battles over Belgium. After his demobilisation in 1919 he returned to Jamaica with his campaign medals and the Silver War Badge.

One of the most famous black volunteers during the Second World War was Cy Grant. Born in British Guiana (now Guyana), South America, Cy Grant was 22 years of age in 1941 when he volunteered to join the Royal Air Force. He served as a Flight Lieutenant Navigator in the RAF during the Second World War. After the war he qualified as a Barrister, but went on to be an actor starring on stage and screen as well as being noted as a concert and cabaret singer. His was the first black face to be regularly seen on British television, singing the news on the BBC TONIGHT programme.

After the war, most of the volunteers returned to the Caribbean and to Africa. They carried with them the RAF’s dynamic ethos, and many of them became active in the independence movements of the 1960s, determined to change their homelands for the better. A number of former airmen attained high office in their new nations.

Every Wed-Fri  in The Nightingale Cafe, come and enjoy a selection of Jamaican inspired cakes and biscuits.

Further information and reading is available from: 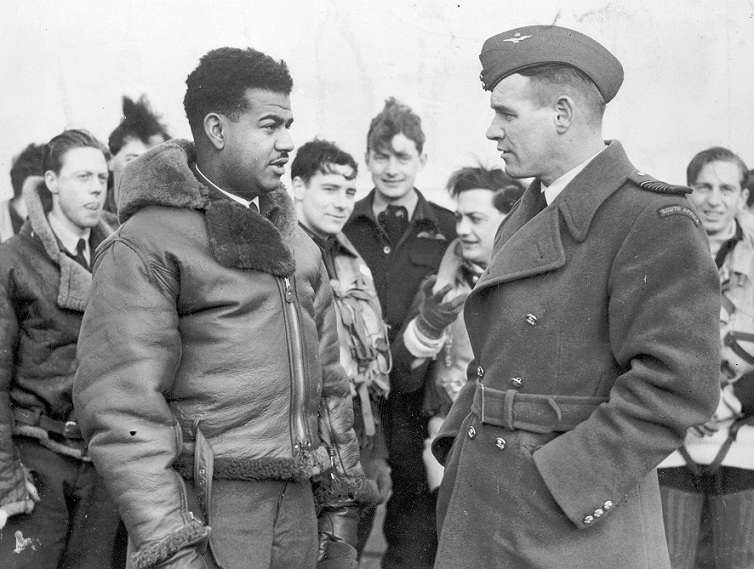