Sunday 8th March is International Women’s Day and to celebrate, we pay tribute to the brave members of the Women’s Auxiliary Air Force (WAAF) whose courage and fortitude was instrumental in keeping RAF Biggin Hill operational during the hardest days of the Second World War.

Sergeant Elizabeth ‘Joan’ Mortimer was one of three Biggin Hill WAAFs to be awarded the Military Medal for bravery for her actions during a heavy bombing raid on the airfield on 18th August 1940. It was the height of the Battle of Britain and Joan was controlling the armoury switchboard when the bombs began to fall. Despite the danger, she refused to leave her post, continuing to relay vital messages around the defence posts. Before the all-clear sounded, Joan ran onto the airfield with a bundle of red flags, placing each one where she knew bombs had dropped but not exploded so that the returning 601 Squadron Hurricane pilots could see where to land safely.

Biggin Hill WAAFs Elspeth Henderson and Helen Turner also received the Military Medal for their courage in maintaining vital communication work during heavy bombing raids at Biggin Hill over the course of the Battle of Britain.

Founded in June 1939, the Women’s Auxiliary Air Force was the female auxiliary of the Royal Air Force during the Second World War. At its peak strength, in 1943, WAAF numbers exceeded 180,000, with over 2,000 women enlisting per week. WAAF duties included parachute packing, aircraft maintenance, radar and wireless telephonic and telegraphic communications. Although they did not participate in active combat, WAAFs were exposed to constant dangers, often carrying out duties in the most treacherous of circumstances.

The role of women during wartime was not without its controversy. WAAFs were paid two-thirds of the pay of their male counterparts in RAF ranks and there was even public criticism for awarding the Military Medal – which some saw as ‘a man’s medal’ – to women. Their courage and service will not be forgotten. 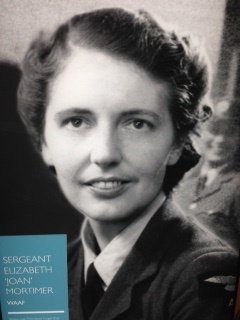