Towards the end of the First World War, Biggin Hill came under attack by German bombers. 141 Squadron were the first operational squadron at the station, flying two-seater Bristol Fighters. A school of wireless telephony had been established at Biggin Hill in 1917. The Bristol Fighters, known as ‘Brisfits’ carried wireless telephony, a significant technological advance. 141 achieved their first kill in May 1918, when Lieutenants Turner and Barwise shot down a Gotha Bomber.

The raids were abandoned as the country’s defences improved. This lull meant a quiet life for the squadrons defending London. A flying competition involving aerobatics and formation flying was organized to keep the pilots entertained. On 22nd September 1918, 141 Squadron were crowned the champions, thanks to the skills of Lieutenant R A Langford-Sainsbury. They were given a silver cup, the title of Cock Squadron and the right to display the fighting cock emblem on their aircraft. They flew back to Biggin Hill in celebration, but tragedy struck when one of their Bristol Fighters crashed killing the pilot and observer. These were the dangerous early days of flying when tragedies were a regular occurrence.

On the Armistice Day on November 11th 1918 a wireless operator at Biggin Hill tuned into the Eiffel Tower station and picked a message from Marshall Foch that hostilities would cease. The bells that pealed in local villages Westerham and Cudham were the first to peal in England. 141 Squadron had played their part in keeping the country safe. 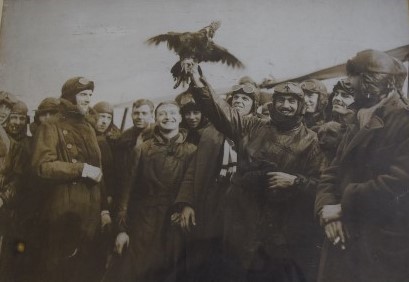